Feast or Famine: Things to Know About Food in Cuba

FEAST OR FAMINE: THINGS TO KNOW ABOUT FOOD IN CUBA

A few months ago the British community in Cuba was a-buzz with rumours.  HRH Prince of Wales and the Duchess of Cornwall were supposedly coming to Cuba – the first-ever official visit by British royalty to the island. But what ended up causing the most buzz and commotion was a comment by the Duchess about the Cuban diet. Ahead of her trip to the island she anxiously let slip that she ‘wasn’t so sure about the food.’

The Guardian urged her to ‘Tuck in, Camilla!’, quite rightly assuring the royal entourage that there was plenty of good grub to be had in Cuba. Sensing a diplomatic faux pas the royal couple’s deputy private secretary also jumped in to reassure us all that both the prince and duchess were ’looking forward to sampling the local produce.” Whatever the story everyone was pretty sure that Camilla wouldn’t have to go looking for her daily bread during her visit.

But what about the rest of us?

BEHIND ALL OF THIS IS A FASCINATING FOOD TALE

You’ve no doubt read about Cuba’s top class eateries – alongside news of sanctions and shortages. You might share HRH’s concern about the availability or quality of the food you’ll find when you visit. So what’s the story?  I’ll be guiding you in with a Best of What (and what not) To Eat and Where. Plus I’ll tell you my top 5 not-to-be-missed Cuban dishes. But behind all of this is a fascinating food tale of a three-culture fusion, colonies, slavery, a cold war, some famine and plenty of feast mixed into the melting pot.

CUBA’S COLONIAL HISTORY ON A PLATE.  WHAT FOOD WILL YOU FIND HERE?

Cuban cuisine is a fusion of mainly Native American Taino, African, Spanish and Caribbean foods with just a hint of Haitian, French and Chinese thrown in. The food you’re now able to enjoy in some of the newest, higher-end restaurants comes from young bloods who are experimenting with traditions from all over the island as well as with international styles and influences. But what you’ll find in everyday Cuban homes– from city to countryside – very neatly hands you the country’s history on a plate: an indigenous population largely annihilated by a colonialising kingdom, that kingdom’s brutal, three-century-long, slave trade plus a later influx of post-slavery indentured labour.

From the indigenous Tainos comes corn, yuca (cassava-like), sweet potatoes, fruits and seafood. Spanish colonialists brought in cattle and pigs, plus the Andalucian tradition of frying foods. Pork continues to be an absolute Cuban staple. The noble black bean (frijol negro) is another. It’s native to the New World but mixed with white rice it’s commonly called Congrí (a Haitian word) or Moros y Cristianos (Moors and Christians) and can be found served in Spain at festivals commemorating the 15th century Reconquista. From the African tradition comes the root vegetable malanga, quimbombó (okra), green, and sweet, plantains – plus the practise of eating rice mixed with other foods and sauces.

China also plays a surprising role. When slavery was abolished in the late 1860’s groups of Cantonese and Hakkan indentured male labour were brought in to perform the work formerly done by African slaves. So, along with the pork, beans and plantain comes rice. And that – accompanied with a simple salad, dessert and espresso to finish – is the potted story of Cuba’s history and the main dish of almost every Cuban kitchen you’ll find across the island. Cooked well this food is absolutely delicious and it’s definitely worth asking for your host’s black bean recipe (made with the classic sofrito – tomato-based sauce) to try out and wow a few friends with back home. Those black beans – plus other varieties and pulses – serve as a staple for the majority of vegan and vegetarian visitors too.

Of course that’s just one dish and there are many more. As you wander or cycle around the countryside you’ll come across the tropical fruits that abound: mangos, pineapples, guayaba, papaya (known as fruta bomba), oranges and bananas are just a few. Your hosts will probably have them growing in their garden. Other delicious root veggies also flourish: malanga, white and sweet potatoes and the aforementioned yuca are some of the best.

It’s worth noting that despite being right in the Caribbean – and so close to Mexico – Cuban food is almost never spicy. Salt, cumin, a little paprika, oregano and bay leaves are about all you’ll normally find on your plate. Slip a little hot sauce in your carry-on if your fancy is something more fiery. The food is often organic, though. The fall of the Soviet Union in the early 1990’s forced Cuba to become agriculturally self-reliant and the result is a thriving organic farming tradition. You will – as someone said – taste the difference. 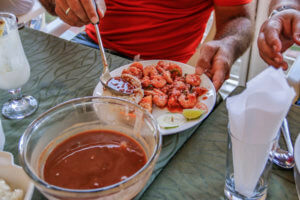 CUBANS ARE ALSO CRAZY FOR PIZZA – THOUGH THE LOBSTER IS BETTER!

Outside of the more traditional dishes Cubans are also generally loco (crazy) about other international basics: bread, eggs, milk, coffee, yoghurt, pizza and pasta. A typical home breakfast might be just coffee and toast but as a visitor you’ll get the lot: omelette, bread and butter, honey, yoghurt, fresh fruit, juice, tea or coffee. And if you stay longer and are lucky enough to stay with a good cook you’ll hopefully tuck into some other absolute classics such as ropa vieja (translation: old clothes. Cuba’s national dish of shredded beef/pork), quimbombó (okra) or lechón asado (slow roasted pork) as well as Cuba’s delicious fish and seafood options – langosta enchilada (lobster in a spicier sofrito) being the most popular. 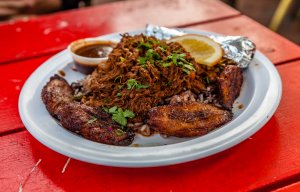 THE SWEETEST TEETH: WHATS FOR AFTERS?

You might be taken aback, though, by what comes next. Yes, we’re talking the white stuff. As far as I can see the Cuban love of sugar has few equals. Indeed ‘…ours are the sweetest teeth’ a Cuban friend laughingly told me. Most wouldn’t dream of going near a small espresso without adding 3 or 4 teaspoons. And who would ever drink tea or fruit juices without it? Estás loco? (Are you crazy?) To be fair I also know a few people who have successfully weaned themselves off but they’re definitely in the minority. Be prepared, then, to put on a few pounds or to regularly say No!

That said, there are some lovely ‘afters’. Try the tasty arroz con leche (sweet rice pudding with cinnamon), a delicious flan (soft caramel custard) or great-tasting turrones (cooked and sweetened grapefruit peel). Beware, though, of the very common dessert you may get served in many Cuban homes – quite a challenge to the European palate. Many people can’t quite get their head around eating a thick slice of very sweet, solid guayaba (guava) paste served with a slender slice of Gouda cheese. I myself have grown to love it but you may not! 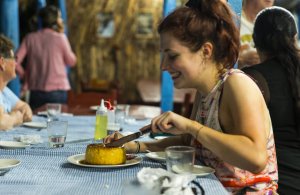 FROM OBAMA TO TRUMP: YES, THERE ARE SHORTAGES BUT NOTHING STAYS THE SAME (ESPECIALLY IN POLITICS)

Only three years ago, in 2016, Havana felt like the centre of the world. The Rolling Stones flew in as President Obama flew out. Karl Lagerfeld’s Chanel Cruise Collection cat-walked the Havana’s main boulevard and rough-tough Van Diesel raced through the capital’s streets in the latest Fast and Furious production. There was barely a hotel room or restaurant table to be had. But, well, nothing stays the same. Especially in politics.

This year Cuba has been particularly hit by Trump’s hardening US trade embargo, the plunge in aid from a struggling Venezuela and by ongoing, internal, problems with production. The result has been a shortage of staple foods and a challenge for the population, restaurants and hotels as they deal with the deficit: chicken, eggs, rice, beans, soap and other basic products started to be rationed in May this year. So, yes, there are some shortages – and it’s not been easy. 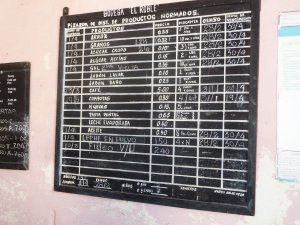 CUBANS SEEM TO HAVE A DEFAULT BUTTON – LUCHAR, INVENTAR, RESOLVER.

But as a visitor you’ll hardly notice the scarcity. Both home and professional cooks are doing what Cubans seem defaulted to do – luchar, inventor and resolver (fight, invent and resolve). For the traveller it might mean that chicken is occasionally off the menu. Or that eggs are not always available. But you’ll eat well, enjoy the simplicity of a delicious, home-cooked feast with a local family and hopefully have time for the more sophisticated delights of a fine-food restaurant along the way.

MY TOP FIVE MUST-EAT DISHES TO EAT IN CUBA

Onto the feast and my five must-eat Cuban dishes – wherever you are on the island.

WHERE TO EAT IN CUBA – A FEW BEST EATERIES*

WHAT FOOD/DRINKS TO AVOID IN CUBA

As in any country there are things best side-stepped. Cuban street pizza and street sandwiches are normally pretty awful, plus I worry about hygiene – it’s hot. I also avoid street ice-cream, soft drinks or any iced drinks: your drinking water must always be bottled or boiled. Better still, to be really safe and environmentally sound, bring your own water filter bottle.

FINALLY…FROM MANGOS TO PAPAYAS: BOTH YOU AND CAMILLA WILL BE FINE 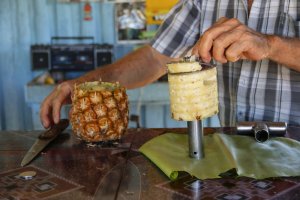 So, the culturally long and historically winding-road answer to Camilla’s fears – and maybe yours too– is that you’ll be fine. There will be enough food – and it will be delicious. And, having read this, you’ll also hopefully understand a bit more about both its history and any foodstuff blips you might encounter along the way.

But let me not leave without mentioning a couple of important words: classic, comic Cuban ones that use fruit to make the point. Cubans will love it if you join in and try them out: it will show them that you understand something of what Cuban life might throw at them, and you! And you actually need to know them so that you don’t embarrass yourself! They involve mangos, papayas and coffee.

If you hear someone say !Que mango! or !Que mangon! they’re not talking fruit. It’s the Cuban way to say Ooh, he’s hot! if you see someone fanciable. Voy a hacer café (I’ll make some coffee) doesn’t mean someone will. It means your host is actually trying to get you to leave. And finally be very careful, please, if you are asking for papaya. It’s called fruta bomba in Cuba because papaya is the name given to a woman’s genitalia. And there you have it.

Eat, drink and be merry!

7 Cuban Experiences You Can’t Miss Out on

Cubania Travel Guide: Top 10 Things to Do in Havana