STRICTLY SALSA – I don’t think so!

“God respects you when you work, but he loves you when you dance”, declares a Whirling Dervish proverb. If that’s the case people here are very loved indeed. Rare it is to meet a Cuban – whether aged three or a hundred and three – who can’t kick up some kind of small or larger storm on the dance floor. 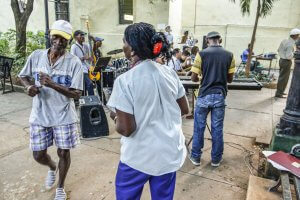 And it not just salsa. There’s a rich history, and practice, of very many different styles and traditions here – mostly fusions of the major players who have lived, passed through or controlled the island over centuries. From danzon, mambo, bolero and ballet, to cha-cha-cha, contemporary dance, hip-hop, dj electronica, rumba and reggaeton Cuba is a nation that loves to dance, and to do it with attitude, flamboyance and flair. 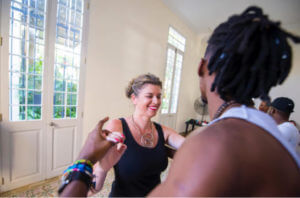 Nonetheless, you’re forgiven for imagining that it is all salsa – even though, fyi, it actually originated in the Latin communities of New York, and as late as the 1970’s. But the island’s influence was there. It developed, States-side, from Cuban forms such as mambo and cha-cha-cha, incorporating a myriad of elements from swing and hustle to the Afro-Cuban/Caribbean forms of guanguanco and pachanga. We have to start with it, though, as its still probably top of yours, and most peoples, to-dance list.

If you’re that noble person who’s already sweated buckets perfecting your salsa/timba twizzles and twirls there are plenty of great places to pirouette with the very best once you arrive. Those less practiced might favour one of the many excellent private lessons (beginners to advanced) on offer. In the capital the most recommended salsa venues are Club 1830, el Diablo Tuntun and the two Casas de la Música. And which bands should you look out for? My top three remain the great Los Van Van, Alexander Abreu y Havana D’Primera, and Aldaberto y Su Son.

It’s easy to be intimidated, too, of course! Over the years I’ve had many dance partners implore me to loosen up more, to drop the upper body rigidity, to, por favor, look meaningfully into their eyes. But Cubans are affectionate, fun and generous people and they love it when you try, even if you fail miserably. So put aside your inhibitions. You can’t leave this island without trying. 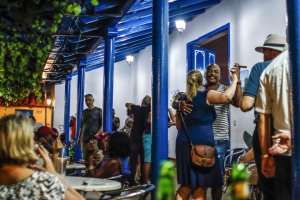 The largely African but partly Spanish mix that is Cuba – Rumba

But what if you’re all salsa’d out?  Rumba is another great option and is a huge part of island Cuban life and culture: a public, party, show-who’s-best music, percussion and dance which reflects the African/ Spanish mix that is Cuba. But its mainly African – with its particular rhythms, drums and claves – and many of its dances have their roots in the religious/spiritual cultures of the over one million Africans who were enslaved and brought here from west Africa’s “Gold Coast’’ by the Spanish. As European dancing rises up on its tippy toes (think Strictly English ballroom or traditional Irish dance) African ones go downwards, earthward. The extraordinary talent and skills of these dancers are legendary but – no matter – drop your reserve and give it a go. Best Havana venues are Centro Folklorico (Saturday), UNEAC (alt. Wednesdays) and Sundays in Callejón Hamel.  Group classes are also held at the Centro Folklorico or, for individual lessons, there are plenty of inspiring private teachers around. Click here for a wonderful short BBC radio programme that features two dancers I actually work with. It will definitely inspire you to give rumba a whirl.

If you’re clubbers and Dj dance music is your thing there’s no shortage of cool spots. In Havana try Club Tropical or the excellent EFE bar to catch the very popular Djoy, DJ Jigue, Witchy, Kike or DJ Lapiz. For years the rave/dance scene was a very small, underground affair but more recently, following a surge of state support, it’s now a far more visible part of the cultural furniture. Many of its DJ’s are very committed to keeping traditions alive: mixing the Cuban styles of rumba, bolero and son with funk, R&B and techno to create innovative, experimental mixes and beats.

Cuban hiphop is also alive and kicking though not with the same intensity of the late 90’s when groups like Orishas, Obsesion, Anonimo Consejo and Las Krudas reigned. In those years there was an explosion of radical voices, especially from the poorer areas of Alamar – a neighbourhood on the eastern edge of the capital. Look out for super-talented old timers Obsesion, Prófugo, Company Yoruba or Grupo Conciencia – all offer thoughtful social commentary. Best venues are the Palacio de la Rumba (Thurs, after 10pm), Club Tropical (Sun, 4-9pm) and across the bay in Regla where Obsesion host a lovely, open mic the third Sunday of each month.

Prefer a more mixed club scene and tunes? There’s loads going on for all tastes. Club EFE is a cool, mixed, easy hang-out, as is the Fábrica del Arte Cubano (FAC) and Club Kingbar.  For an exclusively LGBTQ+ night out most recommended is El Divino (show/disco) – muy nice says a friend who knows. Or try the Saturday night show/disco at Cabaret Teatro Nacional.  If drag is more your thing go to Club Esencia or (daily) to Club Las Vegas. 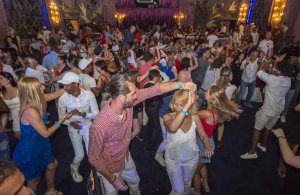 Much loved and equally hated – there’s no escape from Reggaeton

Moving on to Reggaeton …well, you don’t even need to move – it will find you, wherever you are. The genre is now a world-wide phenomenon – here, much-loved by the general population and much-hated by most musicians. Havana’s most popular arts cultural centre (FAC) has, for instance, a reggaeton-free policy! Even the Cuban government recently got involved: they openly criticised the style as ‘’pseudo-artistic’’ and backed by the ‘’poorest possible music’’, further condemning its often-libidinous lyrics and moves as ‘”deforming the innate sensuality of the Cuban woman, projecting them as grotesque sexual objects’’. The fear that reggaeton will overrun and dilute the islands much-protected national culture is now accompanied by hard-hitting laws to control its performance and distribution. Condemnation or no, most Cubans of all ages are hooked and no matter if you’re in the street, bar, car or casa it will get you. For hard-core tunes listen out for favourites Chocolate and Chacal.  For more palatable lyrics/moves try Gente de Zona, Los Cuatro, Yomel y El Dani, Chacal or La Senorita Dayana.

You’ll not always been in Havana, though. Outside of the capital you’ll come across the more traditional country dances that are very loved and practiced there. Cuba’s actual national dance –Danzon – is a fusion of African and European influences which developed here in the late 1800’s. With its mix of European country dances and African folk rhythms it’s a lovely, gentle affair enjoyed by mainly older couples. Don’t miss the chance to try it – it’s a wonderful way to connect. The cha-cha-cha is another old Cuban favourite, developed, like mambo, from the danzon style. All you need to know here is that you start on the 4th beat of the bar, not the 1st. It’s not cha-cha-cha, three four. Its 1, 2, 3 cha-cha  1(cha) 2, 3 cha-cha..! Get it?  Again, if you come across it, join in. It’s easy, great fun and will earn you brownie points.

But where does this focus on and celebration of traditional and contemporary dance, and culture in general, come from?

One of the most important pillars of the 1959 Cuban Revolution relates to culture. The idea to immerse people in the arts – in music, dance, fine art and sculpture, cinema, photography and more – came predominately from Cuba’s political ally, the former Soviet Union.  Making culture affordable and accessible – to study or spectate – was considered crucial in order to develop and maintain national pride and identity. Casas de Cultura (community cultural centres) – along with dozens of arts schools – were built across the length and breadth of the island culminating in the exquisitely-designed World Heritage-status Institute of Performing Arts in Havana.  In dance it led to a style known as “la tecnica’’ – a vigorous fusion of all of the main Cuban styles in one. The result of all this is a population who generally know their poetry from their pas de deuxs. And there’s no doubt – despite fears about the over-focus on “tradition’’ – that this cultural policy has indeed created strong national identity and pride. And that the arts, and artists, remain pretty prized, and accessible: a ticket to the ballet will knock you back $1; the cinema, the equivalent of 2 pence. 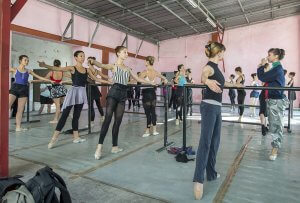 Before Strictly if you said Darcey Bussell most people (in the UK) wouldn’t know who you were talking about. Here, just murmur the name Alicia and everyone, but everyone, knows you’re talking about the founder of the Cuban National Ballet School, plus the names of her most famous roles. The Cuban school is the largest ballet school in the world and is internationally acclaimed for its precise, Soviet-influenced technique. Some criticise the company for what they see as a too-rigid adherence to tradition and a reluctance to experiment but the new boy on the block has changed all that. Carlos Acosta returned to his roots after retiring from the UK’s Royal Ballet Company in 2014 and is revolutionising the classical scene here. His Acosta Dance contemporary ballet company has its own young and highly talented dancers and choreographers, and they’re hot. Catch them, the fine Cuban Contemporary Dance company or Danza Abierta for contemporary delights, and if you’re lucky enough to visit in April don’t miss the wonderful International Urban Dance Festival which takes over the streets and venues of Old Havana. 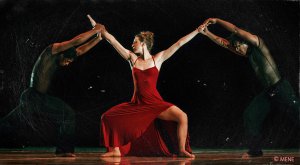 I don’t know if you’ agree but I’d say the joy of all of this lies somewhere between the pronouncements of the great Martha Graham who saw dance as “… a song of the soul’’ and the earthier George Bernard Shaw who professed it “… a perpendicular expression of a horizontal desire!” But I leave you with the great Nelson Mandela, speaking on his 92nd birthday:  “It is music and dancing’’, he said, “that makes me at peace with the world… and at peace with myself…’’.

So what are you waiting for?

“Dance till the stars come down from the rafters
Dance, Dance, Dance ’till you drop.”
(WH Auden)