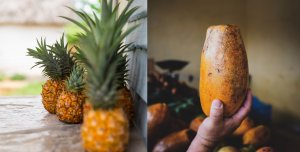 You’re never far from a dulcería, where your sweet tooth can be indulged in pan de gloria (a Cuban cinnamon bun), señoritas (chocolate and “marshmallow” pastries rather than young women), pay (pie!) and, of course, cake. Havana is never short of proud cake-bearers balancing their huge, vibrantly-decorated purchases on one hand as they wobble on the back of a friend’s bike or walk to the nearest bus top, ready to celebrate a birthday, anniversary or Quinceañera. 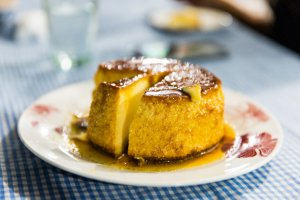 Sugar production and exportation have always been a large part of Cuba’s economy, and with them has blossomed a national love affair with sugar. Not only is sugar a key ingredient in all of Cuba’s signature cocktails – Daiquiri, Mojito, Ron Collins – rum itself is made from sugar cane! Any Cuban will tell you that after a long day at work or a particularly sweaty bus ride, the ideal remedy is a cool glass of Guarapo: sugar cane juice. This is prepared on the spot at a Guarapero stand, where you can watch as a piece of cane is fed through a compressor to become your glass of fresh juice. Delicious!

Fresh fruit juice is a common refreshment on the island, and though mangos, guavas, papayas and pineapples all contain a host of natural sugars, the Cuban juice-maker will still chuck in an extra 2 or 3 cups of sugar for good measure. For some unknown reason, drinking sweetened fruit juice is even considered healthier than eating fruit! 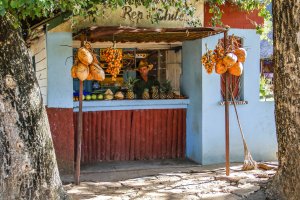 Coffee is an essential part of life in Cuba, but no coffee is considered ingestible before being heftily sweetened by a good few lumps of sugar. If you ever buy a one peso (5 cents) cup of coffee on the street you’ll most likely wince at the amount of sugar that’s managed to sneak in there. 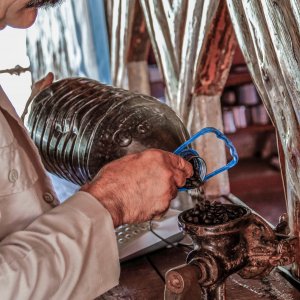 No reflection on sugar in Cuba would be complete without mentioning ice cream. Ice cream comes in many shapes and forms, some more sophisticated than others and in a country riddled with shortages, it’s probably the one thing you can rely on. A typical family day out involves waiting in line at Coppelia, a state-run ice cream parlour that sells ice cream at 1 Cuban peso (5 cents) the scoop. There are also plenty of cuenta propistas, entrepreneurs, who sell peanut-topped cones in Cuban pesos out of holes in the wall. Most petrol stations and cafes sell pints of Cuban ice cream, which are either shared between two or surreptitiously hogged.

Even savoury food such as rice and beans isn’t safe from sugar’s tyranny: most Cuban recipes for potaje (bean stew) call for at least a spoonful of sugar. As one Cuban friend put it, “things just don’t have any taste without sugar”.