All You Need To Know About The Internet In Cuba

Last year, as I always do, I rang my mother on her birthday. But before I could say Hap, she said ‘Now where are you this time?’ She didn’t mean was I in Havana or some other, far-flung location. What she meant was – are you in a park or in a hotel? And if that makes no sense to you at all – and I suspect it won’t – do read on.

Whether you’re cycling through a sleepy Cuban village or on foot – marvelling at the historic centre of Old Havana – you’ll begin to see a group of young people hunched in very familiar postures. And you’ll think to yourself – I remember that! What you’re seeing is what you were, perhaps, once a part of Connectivity – the beginning of the big addiction! Yes, I’m talking smartphones, iPads, Wi-Fi, Facebook, WhatsApp and onwards.

TO CONNECT OR DISCONNECT – IS THAT THE QUESTION?

So if your question is – can I stay connected in Cuba? The answer is -Yes, you can! Here, though, connectivity is only a very recent thing. The technological revolution which flooded most of the rest of the world passed us – in Cuba – by. Whilst you were buying your first smartphone and using apps like WhatsApp, Twitter and Tweet, here Cubans were using their hardy Nokia 3310’s or their slicker, more futuristic, Motorola Razr. And as you are now, probably, looking to limit your connection time and to downsize your footprint we are still excited at every ding, brrrrr and communication possibility.

But for travellers like yourselves, who are obviously looking for something un-touristy, and for experiences that bring you into day-to-day contact with local Cuban people, often right into their homes and families, it’s a very good place, and moment, to visit. Because right now, in Cuba, you can – for the first time – be in good-enough Wi-Fi contact with the outside world and with some clear limits re. hours and coverage. And this, deep down, is probably what most of us are wishing we could get to ourselves, no? The time and means to connect when we want and need to – but also the will/discipline to easily disconnect.

We know what that means, and especially when we travel. It may sound clichéd but it means we read a book, or two. That we are more present with the Cuban family we stay with, or the young man we dance salsa with. That we experience Cuba as the majority of Cubans experience it – offline, chatting, enjoying a coffee, beer or rum, eating with family, working, playing dominoes, hanging out or studying. That we take the time to see what’s really happening rather than what Google or Trip advisor might be telling us. “Only Connect”, wrote the great British novelist, E.M. Forster, in his seminal novel, Howards End. Forster was writing at the turn of the 20 century, already concerned about our dependence on technology and that technological advance was at the expense of authentic human connection. “Live in fragments no longer”, he implored…”Only Connect”.

THE LEAST CONNECTED PLACE ON THE PLANET?

You might not know it but before 2008 Cubans were extremely disconnected, technologically speaking: not even allowed to buy personal computers. The PC’s that were around were almost invisible: hidden in people’s homes, found in hotels, some workplaces, or belonging to foreigners. I bought one in 2003 and also had the surprising ’’right’’ to a very slow dial-up connection in my own home. No Cuban had that. I vividly remember friends – both Cuban and visitors – regularly coming round to my place just to send or receive an email.

INTERNET IN CUBA: US TRADE EMBARGO OR ACCESS LIMITATION?

Cuba blamed its initially poor service on the US trade embargo, claiming that the cost of it to them – estimated at over 753 billion dollars – had obstructed the introduction of new technology and from having the money to buy equipment from other countries. Critics maintained it was equally to do with Cuba wanting to prevent and limit access to outside culture and information. Whatever connectivity was dire and I watched as many a visitor completely lost the plot as they were confronted with the reality of Cuban technology.
‘I’m sorry, I don’t understand’, a wide-eyed and bewildered US couple asked me, eyes on sticks, on finding their hotel connection down. ‘Are you saying that I can’t send a mail to my daughter…right now? But…..how can that be?’

The How Can That Be conversations ran, loop-like, for a further 10 years until 2013. That year saw a big leap forward when access to the internet was allowed. It wasn’t easy though. First, you had to locate the small, ETECSA (Cuba’s only telecommunications company) navigation rooms that were set up in various cities and towns. Then, it cost an exorbitant $4.50 per hour, and the queues were interminable. A further leap came two years later, in 2015, when thirty-five, 3G, Wi-Fi hot spots (mainly in parks) were opened across the Cuban capital. Locals and visitors were pretty ecstatic but, despite a better-value prepaid card (2 CUC per hour – approx. £1.30), the price was still a thorny issue for most Cubans. The block-long parks, previously lightly populated and used mainly by kids during the day or lovers by night, became packed, illuminated by hundreds of blinking screens and the faces of their users. But it was December 2019 – oh, so recently – that witnessed the most radical change yet: internet, 3G data packages, available on Cuban mobile phones. (Visitors can also access this and details are below). 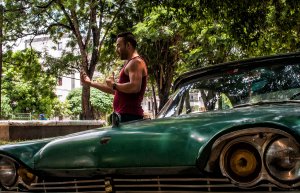 So, yes, Wi-Fi isn’t free in Cuba – anywhere – and it’s not fast, anywhere. It also drops out sometimes, sometimes regularly. It’s still, relatively, very expensive. It’s still quite tough for the digitally nomadic whose income relies on world wide web access. 3G is the norm. Friends and techies tell me that 4G is only available in odd parts of the Malecón, and not always. 4G is also available to some current, data package users in Cuba but it looks this is just for those who show heavy use. So, forget 4G or LTE connection, for now. Connectivity generally is also somewhat restricted and controlled – so remember to copy all your insurance details or any other important information before travelling. And don’t ever completely rely on being able to get online in any place, or at the last minute.

But now you can at least connect pretty easily, with your prepaid card, in a 3G, Wi-Fi hotspot, often in private houses, and even wherever you are if you buy the mobile data package. You can park your bike in that sleepy village square and chat to your lover in London, ring your mum n Manchester, check your bank and allay those debt fears, see how many people like your Instagram, are following your tweets or what they’re up to on Facebook. Search engines seem to be easy: Google, Yahoo, Bing and Ask.com all work well. That level of access is huge for people here, great for people doing business, and just a general big relief for most visitors. It used to be cold Wi-Fi turkey for the traveller. Now you can more happily vape your way through it.

HOW TO CONNECT TO WIFI IN CUBA – FOUR BEST WAYS

Don’t forget that you’ll be on an unsecured network. Also, note that without a VPN you’ll be blocked from all things American like Amazon or eBay. And as Cuban Wi-Fi isn’t that fast maybe forget videos, multimedia, or live blogging your Cuban adventure. But Facebook, Instagram, Google, Gmail etc are all easy to access. 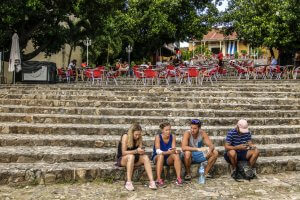 FINALLY, BACK TO FORSTER…

So maybe you will want a little fix of connectivity, maybe even most days. No problem there. But I imagine you’ll be looking to switch off, too – for travellers looking for a more off-grid, non-touristy experience something more digitally-free is normally a real bonus. It’s what my god-daughter calls her Annual Digital Detox. So here’s your chance. Read that book or local Cuban newspaper. Sit and people-watch in the shade of an old town square. Chat to whoever comes your way. Cycle through the lush, tobacco-growing countryside. Walk, wander, look and listen. Dance, or learn how to. See what’s really happening. Enjoy watching kids play with a ball or practise some new moves – instead of watching those things on their mobiles or tablets. Or yours.

“Only Connect” – as Forster urged us – with people, places and nature. Cuba is just perfect for all of that. 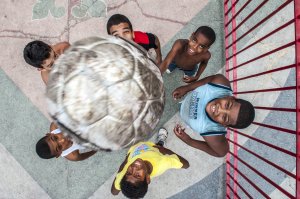