3 Most Epic Cycling Routes in Cuba

Cubania loves exploring the island and we’re constantly out on the road looking for stunning new routes. The first to try them out are our guides: we asked a few of them to share their favourite rides. 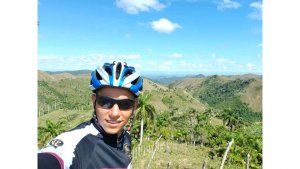 “I love this ride from the valley of Viñales through mountain landscapes to Cueva de los Portales.” – Guide: Liesner

Viñales is a UNESCO world heritage site famed for its unique prehistoric landscape. Its fertile soil is perfect for tobacco cultivation and everywhere you look in this luscious valley, tobacco is being grown, dried or rolled into world-leading cigars. It’s not just Viñales’ tobacco that’s delicious, the area’s organic fruit and vegetables make for an unforgettable dining experience. 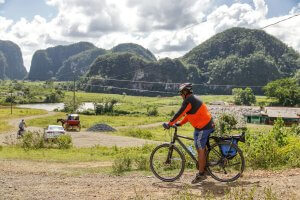 Cueva de los Portales was Che Guevara’s mountain hideout during the 1962 Cuban Missile Crisis, when he commanded Cuba’s western army. Che’s revolutionary HQ is atmospherically situated within a 30-metre high riverside cave. You can visit the small concrete structure used as Che’s office and bedroom during this momentous period in world history.

This ride goes through some of the most jaw-dropping scenery in Cuba. The undulating hills in this area are covered in towering royal palms, dwarfed only by the backdrop of elegant and unusual limestone mogotes, mountains leftover from a prehistoric underwater cave system. The ride follows back roads through small farming communities, where locals sell fresh fruit and coconut water. There are some tough climbs on this route, but the views more than make up for it! 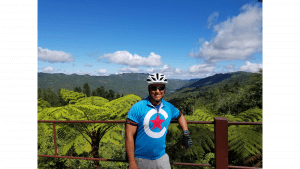 “The ride from Trinidad to Cienfuegos has it all: sierras, sea and stunning scenery.” – Guide: Willhunt.

Named an UNESCO World Heritage site in 1988, Trinidad’s collection of beautifully preserved colonial buildings have the Sierra del Escambray as a backdrop and overlook the Caribbean Sea. Much of the city’s fortune was made during the sugar boom of the early 19th century when the city’s nucleus of elegant mansions was built. Trinidad is best explored on foot, following its winding cobbled streets to open market places where innovative locals sell artisanal goods, from hand-woven tablecloths to pottery.

The city of Cienfuegos is known amongst Cubans as ‘The Pearl of the South’ and its colonial centre is famed for its eclectic architecture. Cienfuegos is the only city in Cuba founded by French migrants fleeing the slave revolution in Haiti in the early 19th century. It was home to one of Cuba’s most famous bolero stars, Benny More, and has its own mini malecón to rival Havana’s.

This spectacular route follows the Circuito Sur, a softly undulating B-road that hugs the coastline from Trinidad to Playa Bocanguila, before turning inland. With the Caribbean sea on one side and the Sierra del Escambray mountains on the other, it’s hard to imagine more inspiring scenery for a bike ride. Eventually the road turns inland to traverse picturesque farmland until reaching Cienfuegos. 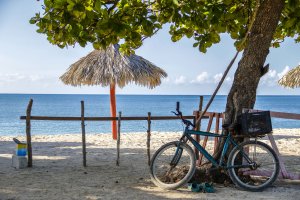 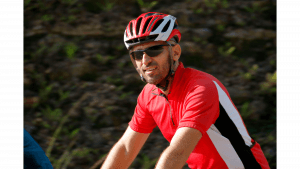 “By far the best way to see Havana is by bike!” – Guide: Lazaro

Miramar is the one of the newest areas in Havana and is home to the majority of the city’s embassies. Compared to Old Havana, Miramar is spacious and modern with attractive houses and wide avenues. Take a stroll down stylish 5 Avenue, visit the city Aquarium or catch a concert at the huge Karl Marx theatre.

Old Havana is the oldest part of the city and where the majority of visitors spend most of their time. Havana is currently celebrating its 500th anniversary and though parts of the old town are showing their age, others are freshly restored and sparkling. Old Havana is a wonderful mix of impressive colonial buildings and lively street life. The ride ends on the Avenida del Puerto, a wide waterside avenue with great views of the historic Cabaña fortress across the bay.

This ride passes through Havana’s four distinctive neighborhoods: Miramar, Vedado, Centro Habana and Habana Vieja. It also takes a detour through the Bosque de Habana, a forest hidden in the heart of the city steeped in magic and mysticism. From the quiet coastal road in Miramar, to the vibrant streets of Centro Habana, from the bars and theatres of Vedado to the plazas and cathedrals of Habana Vieja, this ride offers a unique insight into the many faces of this extraordinary city. 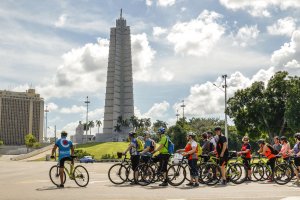 Would you like to try these rides for yourself?

RIDING HAS ITS OWN RHYTHM